Noella Delorme died on Saturday, July 21, 2018, at the home of Richard and Cindy Delorme in St. Cloud, Minnesota. 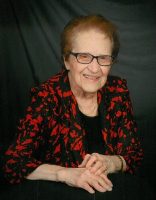 Mass of Christian Burial will be held at 1:00 PM on Friday, July 27, 2018 at St. Bernard’s Catholic Church in Thief River Falls, MN with Father Rick Lambert presiding.  Burial will follow at St. Bernard’s Cemetery in Thief River Falls, MN.
visitation will be held from 5:00 PM until 7:00 PM with a 7:00 PM Prayer Service on Thursday, July 26, 2018 at Johnson Funeral Service in Thief River Falls, MN.  Visitation will also be held one hour prior to the funeral mass on Friday at St. Bernard’s Catholic Church.
Noella Derosier Delorme was born on December 18, 1926, to Joseph Derosier and Minnie LaCoursiere Derosier in Terrebonne, Minnesota. Noella was the apple of her father, Joe’s, eye.  She had the fondest memories of her parents and often shared much about their French heritage. She was raised on a farm in Terrebonne and attended Beaugerleau School.  Noella was baptized and confirmed at St. Anthony Church in Terrebonne, Minnesota.
Noella married Ernest Delorme on January 4, 1944.  They lived for a short time in Michigan, returning to Brooks, Minnesota, to remain close to family.  Noella often referred to their home in Brooks as a tarpaper shack. She always referred to the neighbors in Brooks as angels who assisted her while she was caring for the eight children – Roy, Marlys, Ron, Richard, Margaret, Russ, Suzanne and Mike.
In 1954 the family moved to Thief River Falls where Ernest worked at the creamery.  Noella began work at the Rex Café the summer of 1957 for Jack Edmiston. Her intention was to work through that summer.  When fall came, Jack went out searching for child care for the three preschoolers.  Her neighbors on Dewey Avenue assisted Noella with child care, each on different days.  When Mr. Edmiston sold the Rex to Ed Turrene, Noella taught Ed how to cook.  Her famous last words at the restaurant were,” What goes into the garbage is the company profits!”   When the kids were old enough to work, Noella and Ernest contracted with Falls Clinic for cleaning.  Each night, after working their main jobs, the family met at the clinic to clean the rooms, empty trash, and polish the floors.  And when Ernest and Noella’s “workforce” left home and moved on, they retired from that job. Noella retired from the restaurant, which had moved to Handy Farms, when she was 82 years old.
Noella’s Catholic faith was her guide and strength her entire life. Her vibrant faith enabled her to remain strong and steadfast when she cared for Ernest his last ten years of life.  It was her determination that allowed her to purchase a car, color her hair, refuse any walking assistance and live alone for the past 17 years.  Noella was a delight to be around, always accompanied with lots of conversation and laughter.   She was a card shark who loved to beat her sons in cards. Noella continued to be a great cook, and was known for the best sour cream raisin pie in town.  She spent many afternoons making bars or treats for happenings at St. Bernard’s Church.  Many nights,  Noella would be in her chair praying the rosary for relatives and friends. She had a strong devotion to Saint Anne, the mother of Mary, the Blessed Virgin.  Noella especially was connected to the shrine Sainte Anne de Breaupre in Quebec Canada.  She credited the shrine and Saint Anne for her ability to mother her eight children.
Noella is preceded in death by her husband Ernest, son Ronald and daughter Suzanne Krause, sons-in-law – Alan Krause, and Dennis Mattson, great grandchild William O’Hara III, her parents, two sisters – Bernice Valley, Marcella Leydecker, two brothers – Don Derosier and Herb Derosier.
Survivors are Roy and Evelyn Delorme, Marlys Millner, Richard and Cindy Delorme, Margaret Mattson, Russ and Karen Delorme, Mike Delorme and partner Tom Weiland; 16 grandchildren and 29 great-grandchildren; sister Darlene (Dory) Kazmierczak,  many loving nieces, and nephews.
May her memory be blessed. Condolences may be sent at www.johnsonfuneralservive.com.