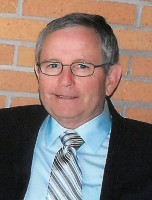 James Evan (Jim) Sims was born February 15, 1941 in Hot Springs, Arkansas, the son of Evan and Nellie (Owens) Sims. Jim moved to Mahnomen, Minnesota with his mother and step-father, James Snobl. Jim was baptized at the First Lutheran Church in Mahnomen. He graduated from Mahnomen High School in 1959. He attended Moorhead State University in Moorhead, MN and received both his Bachelor (1963) and Master (1966) of Science degrees in Health, Physical Education, and Recreation and a minor in English.

On December 21, 1963, Jim was united in Marriage to Sharon Rae Tollerud at First Lutheran Church in Fergus Falls, MN. To this union two children were born, Sue and Steve.

Jim began his teaching and coaching career in 1963 at Eagle Bend, MN. He was there for two years, then returned to Moorhead State University as a graduate assistant for one year. In 1966 he accepted a position in the Thief River Falls School District, and remained there for 10 years as a teacher and coach. In 1976 Jim answered the call to become the University of Minnesota-Crookston’s Head Football Coach, a position he held for 19 years. In 1995, Jim returned to Thief River Falls for 12 years as the Athletic/Activities Director until his retirement in 2007.

Jim was recognized with many honors during his coaching career.  He built a very impressive high school coaching career prior to joining the staff at UMC. He was named Coach of the Year several times for his team’s successes and accomplishments in football and track. He was inducted into Athletic Hall of Fame for the following: the Thief River Falls Prowler Hall of Fame, the Minnesota High School Football Coaches Association, and the University of Minnesota-Crookston. He also received the Torch and Shield Award, the highest award the University of Minnesota-Crookston can present.  Jim officiated basketball and was a track starter. He was recognized by the Minnesota State High School League Coaches Association with a 30-year Service Award.

Jim is a member of Zion Lutheran Church in Thief River Falls.  He was always a very active member of his community, serving on countless chairs and committees throughout his life, including the Sports Boosters, UMC Team Backers, Elk’s, Rotary, Special Olympics and co-chaired the operations committee for the World Jr. Hockey Tournament held in TRF.  Jim always had a passion for sports, in high school he moved 20 miles from the family farm to live in Mahnomen MN with Art and Evie Van Metre so he could participate in high school athletics, enabling him to go on to play college football, which led to a lifelong career of coaching. Jim enjoyed fishing, boating, grilling and an occasional trip to California, but most of all he loved watching his children and grandchildren’s activities.

Jim was a very kind, hardworking individual with unfailing positivity, influencing many over his years. His passion for teaching and coaching was a gift he loved to share, knowing that sports could be an invaluable lesson for life. Up until the very end Jim was always ready with a fist bump or a funny comment, whether it was medical staff, friends or family he always remained positive trying to keep the battle alive.

He was preceded in death by his parents, Step-Dad, and Sister-in-Law Wanda Snobl.