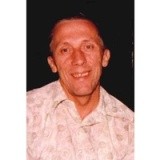 Roger was a hard worker. He was known for the way he could throw hay bales. He took pride in knowing no one else in the neighborhood could throw bales like he did. He also loved making things with wood. When he was quite young he built a “shack” out of old wood he found around the farm. He also built birdhouses, wooden Santa and his reindeer, and a nativity scene for the yard.

Roger married Kaye Horn on June 11, 1983, at Zion Lutheran Church in Twin Valley, MN. Roger was a lifelong member of Winchester Lutheran Church and served as a custodian over the years.

Visitation: One hour before the service at the church.