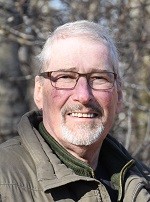 age 64, rural Fertile, MN passed away peacefully in his home on Tuesday, February 26th, 2019. He was surrounded by his family and the loving care of Hospice after a long and courageous battle with cancer.

From his birth on March 18, 1954, up until his passing on Tuesday, Steve cultivated a life full of laughter, great stories, hard work, and a passion for the great outdoors.

He was born to Gordon and Elvira (Quant) Ranz in Crookston, MN and grew up in the Sandhills of Fertile, MN. He was baptized and confirmed at Varnes Lutheran Church.  Steve was a 1972 graduate of Fertile-Beltrami High School and then enlisted and served in the United States Army from 1972-1975. During that time, he met Patricia Metcalf. They were united in marriage September 13th, 1975 in Oberlin, KS and returned to Fertile to begin their life together.

Steve worked several various jobs around the area, including farming and construction. In 1989, he began work with Strata Corporation, based in Grand Forks, ND, as a General Resource Manager, and essentially never worked another day in his life. His job brought him so much joy and fulfillment; from making gravel and land deals, negotiating contracts and forming many lifelong friendships with coworkers and clients of who several were like family to him. He truly loved what he did every single day.

He lived life to the absolute fullest. As they say, ‘It’s not the years in your life that count, it’s the life in your years.” This couldn’t be truer with Steve.  He embraced all that life had to offer with such a positive outlook, despite his numerous struggles with cancer that first started when he was age 39. He deeply loved his many hunting and fishing adventures and enjoyed playing card games with his beloved family and friends. He could often be heard telling memorable stories and brought so much laughter and joy to everyone around him.

Family, friends, and others whose lives Steve has touched are invited to attend services at Concordia Lutheran Church on Monday, March 4th at 11:00 a.m. to reminisce, grieve, support each other, and of course, tell a great story.

Visitation: Sunday, March 3, 2019 from 5-7 at Concordia Church with a 6:30 PM prayer service and one hour before the service at the church on Monday.