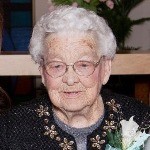 Violet Lorraine Raaen was born July 27, 1920 in Crookston, MN, the daughter of Olaf and Mollie (Moan) Raaen.  She was baptized and confirmed and attended school in Crookston.
Violet was united in marriage to Peter John Sullivan in 1945.  Violet and Peter were married 49 years. Peter died June 24, 1994.

Violet worked at Bethesda Hospital in Crookston for six years, from 1939 to 1946.  She then became a full time homemaker.  Violet enjoyed cooking and baking for her family.
She was a member of V. F. W. Auxiliary, where she was past president, Hospital Auxiliary, Church Circle, Foresters, American Legion Auxiliary, and Homemakers (Happy Home Wreckers Club.)

Family condolences may be sent to www.johnsonfuneralservice.com