Oral M. Bjorem, 88, passed away peacefully on Saturday, March 16, 2019, at his home in Albuquerque, NM with his loving family next to him.  Oral was born and raised on the family farm at Ada, MN, and attended schools there.  He was an active member of Valley Lutheran Church in Tome, New Mexico. 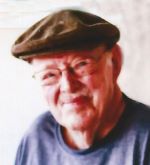 He served in Germany during the Korean War where he was decorated with the Occupational Medal and National Defense Service Medal.  Oral also was active with the VFW.  Following his service, he worked at IT&T in communications then moved to Bosque Farms, New Mexico where he retired from US West Communications.  He was known as a dependable, hardworking, and intelligent employee.

Oral had a passion for riding Harley Davidson Motorcycles.  He owned several motorcycles throughout his life and he rode well into his early 80s.  Every winter he would RV along with his loving dogs traveling everywhere from Alaska to New York and all through the United States.

He is preceded in death by parents, Sam and Hilda Bjorem and brother-in-law, Will Wilson.  He is survived by his son, Jeramy (Charlene) David, brother  Dale, sister Verna, nephews and nieces, Greg, Marcia, Mike, Anna and Debra Ann.  Also, extended family, Angie, Lance, Emily, and Ella Sanders, Hiedi, Jeren, Hayden, and Kalie Hamlin, Randy, Jonathan, Stephanie, Sadie and Allison Thiel and Andrew. Along with many cousins and friends.