Chester Willis Waller, age 93, of Crookston died April 24, 2019 while residing at the Halstad Living Center in Halstad, MN.  A Memorial service celebrating his life will be held, June 7th at 12:00 PM at Stenshoel-Houske funeral Chapel with Pastor Bill Humiston 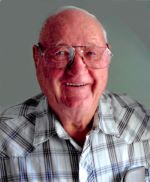 officiating. Visitation will be held one hour prior to the service at the funeral home in Crookston.  Inurnment will be in Oakdale Cemetery in Crookston.

Chester “Chet” W. Waller was born May 20, 1925 in Crookston, MN to Oscar and Alma (Christopherson) Waller. While growing up in Crookston, he attended Carmen Grammar School. Upon finishing school, Chester worked on the Jack Letnes farm before entering the U.S. Army on January 1, 1945 at Fort Snelling, MN. Chet was stationed in Okinawa and continued his service until his discharge on Dec. 16, 1946. After he departed from the military, Chet immediately began working for the Great Northern Railway, which eventually became the Burlington Northern Railroad. He was with the railroad for 39 years before his retirement in 1985.  During his working years, Chet was introduced to Ethel Mann-Larson, and the couple was eventually joined in marriage on March 22, 1975 at Trinity Lutheran Church in Crookston. Chet and Ethel continued to make Crookston their home.  Chet was a member of Trinity Lutheran Church, Lifetime VFW member, American Legion, Elk’s Club, and a 68-year member of the Eagle’s Club (since 1943), all of Crookston.

Chet was a great husband, father, and grandfather. He was a self-taught musician, and he loved to tease and joke around. Chet could often be found in his garage tinkering on a project or maintaining and cleaning the cars. He always looked forward to dancing at the Eagle’s and other clubs and he invited the cooler weather so he could build a wood fire in the basement stove.

Chester was preceded in death by his parents, brothers, Howard and Harvey, and sisters, Helen Gillispie and Margaret Buckler and one step-son, Brent Larson.