Lila M. Anderson, 91, Ada, Minnesota, died Sunday, June 9, 2019, at Benedictine Care Community, in Ada under the care of Hospice and her family. 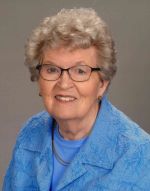 Lila Mardell Braaten was born March 31, 1928, the daughter of Nells and Nellie (Edwardson) Braaten at home on the family farm at Ross, MN. She was baptized May 13, 1928 and Confirmed in September of 1942, both in Concordia Lutheran Church at Ross.

She was the oldest of four children. She attended country school and graduated from Badger (MN) High School in 1946. She enrolled at Concordia College in Moorhead, MN, where she graduated in 1950 with a degree in business education. She taught school in Roseau, MN, West Central School in Morris, MN, and also at Luther College, in Decorah, Iowa.

In 1954 Lila came to Ada to work with the Minnesota Extension Service as a 4-H Club Agent in Norman County. She was united in marriage to Dr. Clayton A. Anderson on August 10, 1958, at Concordia Lutheran Church in Ross, MN.  They adopted two boys as infants at the age of one month, Mark and Paul.

Lila worked part time with her husband at his Optometric practice and when the children were in high school she began full time office manager until his retirement. Clayton died on February 14, 2010. They enjoyed many years at their cabin at White Earth Lake and also traveled extensively and went on several cruises. Lila’s family and her faith were very important. She was very active in numerous church and community activities. As a member of Grace Lutheran Church, she served in various aspects of church organizations including church women and council. She was a long time member of the 20th Century Study Club, American Legion and VFW Auxiliaries, quilting, Meals on Wheels, 3-2 Club, water aerobics, and Cub Scout Mother.