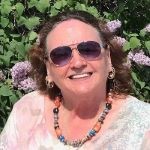 Lynn was born on December 18, 1947, in Brooklyn, NY. She was the youngest of three children born to Edward and Karin (Ekstrom) Delaney. She was baptized and confirmed at Our Lady of Perpetual Help in Lindenhurst, NY. She attended high School in Copiague, NY, in Long Island and graduated in 1966. She attended Francis Tuttle Nursing School where she began her long career in nursing and caring for others.

Lynn was an adventurous soul who always went where the action was. She was fascinated with fast cars and loved to take her 1966 red Pontiac LeMans convertible. She would often share an anecdote about how she was banned from the Jersey Turnpike for drag racing.

The late 60’s found her employed at Pilgrim State Hospital on Long Island where she worked as a nurse. She was known to go above and beyond her nursing duties and would bring disabled patients her homemade soup. One day at work, a call came out for nurses for a little spur-of-the-moment festival that went on to be known as Woodstock. She volunteered and worked long hours in tents taking care of both concert-goers and some of the greatest musicians of all time. She would recall meeting and seeing performances by some of her favorite artists like Janis Joplin and a less than impressive meeting with a rather disheveled Jimi Hendrix.

In 1973, Lynn moved to Fort Myers, FL, where she worked at Lee Memorial Hospital. It was here that she met a young man named Jeffrey Larson. Jeff found her quite intimidating at first. They had contrasting personalities and were from different walks of life. Although she was a tall no-nonsense girl from New York and he was a humble farm boy from Minnesota, her personality and beautiful waist-long hair drew him to her. Over time, they got to know each other and fell in love — a classic example of “opposites attract.” They dated for a while, during which they found out that they had a lot in common and they adored each other’s company. Jeff asked for her hand in marriage. They got married on September 25, 1977, at Our Lady of the Assumption Church in Copiague, NY.

In April 1978, Jeff decided to take his new wife Lynn to Fertile, MN, where they started a family. Jeff took the city-girl to his rural home site, but her New York accent never faded. Lynn embraced the country life and enjoyed the nature that surrounded her; especially the lilacs. They had originally planned to live off the land and make money trapping gophers, but they found nursing to be more lucrative and continued in that profession. Lynn enjoyed gardening and raised chickens. Her salsa and strawberry jam won awards at the Polk County Fair. Their home soon became a gathering place for friends and family. They looked forward to summer time visits from their beloved nephews and nieces and enjoyed hosting volleyball parties.

Jeff and Lynn both worked full time as nurses in Crookston and raised two sons, Matthew and Michael. She was very proud of her sons and taught them the value of family. They kept her busy with Cub Scouts, Football, Taekwondo, Wrestling and Track. She always did her best to be a part of their various recreational activities and gave them all her support and love.

Lynn experienced hardships in life but she was a strong person who chose to see the positives in the worst of circumstances. She used her experiences to help others who were in similar situations. She felt especially compelled to help those facing addiction issues and also volunteered to speak and counsel those looking for direction.

She surrounded herself with crafting various projects that brought her happiness even when her health was not at its best. Her beautiful pressed flower bookmarks were gifted to many of her loved ones. She worked on her garden and cared for her various birds, including a disabled cockatiel named Hope with which she commiserated.

Lynn has always been very spiritual and spoke often of her Higher Power. She enjoyed her time at Little Norway church and was inspired by nature and music. She was a very talented writer. She left notes of prayer and meditation all over her home in her beautiful calligraphy handwriting. One of the last things she wrote before passing was the following poem that eloquently sums up the kind of soul she was:

“What does your soul garden look and feel like? Healthy, happy and vibrant?

Able to withstand a little drought, a tiny windstorm, or a quick heavy rain?

What attention do they crave?

When I can listen and hear my soul/spirit song louder than the Doobie Brothers, ‘Jesus is my Friend,’ I just know that my spirit is reviving…

I pledge my soul and spirit songs to Him, earth Mother, sisters and friends.”

Lynn was truly a beautiful soul and she will be deeply missed by her husband of 41 years, Jeffrey, two sons Matthew (Nora) Larson of Fargo, ND, and Michael (Kris) Larson, Fertile, grandchildren Jacob, Robert, and Edward, her brothers Curt (Sharon) Delaney, and Russel (Patti) Delaney, as well as several nephews and nieces whom she truly cherished. She is also survived by brothers-in-law James (Jennifer) Larson, Donald Larson, as well as sisters-in-law Anita Andres-Larson, Vickie (Mark) Deshane, and Rosalyn (Dave) McCord.

She was preceded in death by her parents, Edward and Karin Delaney, an infant daughter Mary Lynn and an infant grandson Steven John.

The family would like to thank Sanford Hospital, especially nurse Joe, who did an outstanding job with Lynn, and comforted the family as she passed.