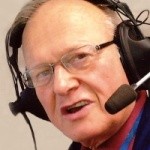 Duaine Leslie Sanden was born on March 22, 1945 in Grand Forks, ND the son of Gilmer and Bertha (Mattson) Sanden. Starting in his early teens, Duaine enjoyed a radio career spanning six decades starting in 1959 at KILO Radio. He once noted, “They got so tired of throwing their paper boy (me) out, they finally gave me a job in radio.” In the mid-60’s, he started doing play-by-play for high school sports covering teams up and down the Red River Valley on both sides of the river. Duaine was known for his own way of calling sports – “Wide to the East”, for a missed field goal and “Goal Time”, for a touchdown. He was an early voice for University of North Dakota sports, being inducted into the North Dakota AP Sportscaster Hall of Fame in 2018. He is also the 2019 recipient of the Pioneers in Broadcasting Award from the North Dakota Broadcaster Association.

Duaine was well known for his Christmas season broadcast of school holiday music programs. He recorded and replayed the concerts on Christmas Day. Last Christmas marked the 55th straight year for “A Very Sanden Christmas” which was aired on KNOX.

Duaine was the owner and operator of the Maple Lake Pavilion taking pride in the history of the historic facility and enjoying the many people he met there. Duaine was a very active promoter of area county fairs having served as a member on the Grand Forks Fair board of directors. He was inducted into the North Dakota Association of Fairs Hall of Fame in 2016. Duaine served in the United States Air Force Reserve from November of 1965 until November of 1998 when he retired as a Chief Master Sargent of the Air Force.

He is survived by his sisters, Dianne (John) Jones and Geraldine Marken both of Austin, TX; 2 nieces and 2 nephews.

He was preceded in death by his parents and a nephew.

In lieu of flowers, please consider a donation to the Mentor Fire Department, 52 Lincoln Ave. Suite 3 Mentor, MN 56736 or the Circle of Friends Humane Society, 4375 No Washington Grand Forks, ND 58203