The beautiful life of Edna Minnie Anderson ended on August 7, 2019. 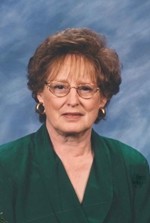 Edna took her last breath with her family by her side at the same farm she had lived for the last 62 years.  Edna had been diagnosed with Parkinson’s Disease and Dementia with Lewy Bodies.  Dementia is a horrible disease and Edna had not been herself for the last few years.

Edna was a very creative person, she lovingly sewed adorable dresses for her four girls.  Crocheting and knitting were also happy hobbies. She was a talented artist (oil painting, watercolor and rosemaling) and enjoyed crafts and decorating her home on the farm. Edna loved to socialize and got great joy out of having coffee with her friends in Fisher twice a day.  She also spent time with her sewing club and get togethers with the neighbor ladies.  She enjoyed bowling, playing cards, gardening and getting a great deal at auction sales!

Edna spent many fun years working in the scale house with Ilene Yanish at American Crystal Sugar during the beet harvest.   She lovingly cleaned Trinity Lutheran Church in Fisher.

Special thanks and gratitude to Denise Anderson for tenderly caring for our dear mother.  The family appreciates the care given by Altru’s Hospice over the last several months and the loving help of Sandy Hlady.   Edna was a devoted mother, grandmother and great-grandmother.  Christmas at the farm will be a lasting magnificent memory for the whole family.

Edna spent her childhood on the farm at Euclid, MN.  Edna’s family included 2 sisters, Bernice Sherry and Arlene Huot and three brothers, Harold, Martin and Clifford.  Harold and Martin preceded Edna in death.  Her parents, Minnie and Werner Schulz are both deceased.  Her sister-in-law, Eunice (Harold’s wife) lives in rural Grygla.  Delores (Martin’s wife) lives in Euclid and Clifford and his wife Lindy live on the family farm just outside of Euclid.  Up until a few years ago, Edna was able to play cards with her sisters and wonderful sisters-in-law.  She also enjoyed her many nieces and nephews!

In 1957, she and Sidney Anderson eloped to California and were married on January 26th.  They spent the rest of the winter in the San Fernando Valley and Edna worked at Pancake Heaven!

Edna had hoped for 4 boys, but ended up with 4 girls:  Carolyn Berdal, Jaci Anderson, Denise Anderson and Suzy Anderson Heeb.  The greatest gift Edna has given her girls is the love of the Lord.

Jaci Anderson is married to Mark Edevold.  They make their home near Gonvick, MN and have 2 sons.  Alex Edevold is married to Tiahna and resides in Grand Forks.  Ryan Edevold is currently living in St. Louis Park, MN.

Denise Anderson is currently living at the farm near Fisher and providing care for Sid.

Suzy Anderson Heeb lives in Shorewood, MN with husband Andreas and their 2 children, Julia and Hugo.

Grateful thanks to the kind neighbors, relatives and friends who have stopped over to talk (or phoned) during Edna’s final years.  Mom always seemed to enjoy having company and Denise loved the conversations.

The family invites you to attend Edna’s memorial service at Trinity Lutheran Church in Fisher, MN on Friday, August 30th at 2 pm.  Visitation: 1 hour prior to the memorial service.