The Crookston Fire Department’s has put together their annual 9/11 memorial honoring the 343 firefighters from New York City who were killed during rescue efforts when the World Trade Center towers collapsed during the terrorist attack in 2001.

Crookston firefighter Justin Johnson talked about this year’s memorial. “Every year on 9/11 we usually have a job out there commemorating the firefighters,” said Johnson. “The mural is painted by Mike Swenson.  He does a fantastic job.  We put that up at the main station and a mural up at the north station.  There are 343 flags, one for each firefighter killed at the World Trade Center. The 9/11 memorial at the station is put together by a combination of the Fire Association members and the full-time firefighters along with the Chief.  Every year we try to make it a little more special, add something to it and/or change it up to make it the best we can.”

There is also a second mural that is being displayed on the west exterior wall of the fire department’s new north station, both murals were painted by Crookston firefighter Mike Swenson.

The Fire Department encourages people to stop by the memorial at the main station both during the day once the sun goes down as the lighting has created a really neat silhouette against the side of the building. Today is the 18th anniversary of the attacks that killed 2,996 people and injured more than 6,000 others. 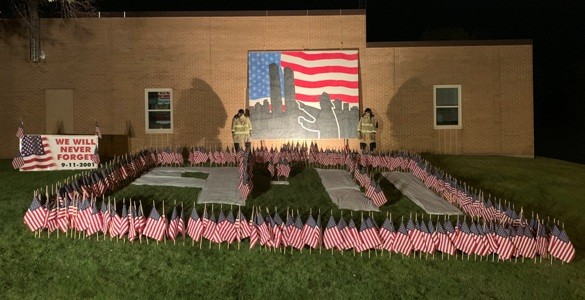 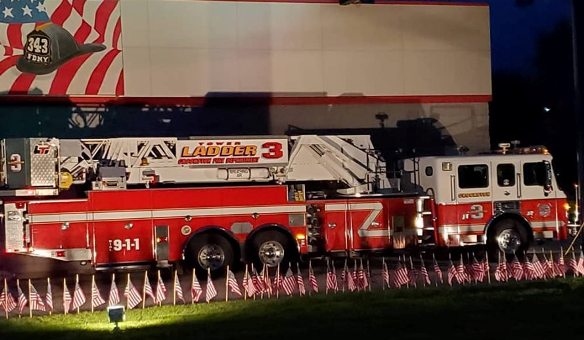 The Crookston Fire Department’s display at the North Station.