Charles Gordon, the son of Charles and Gena (Guttormson) Joop, was born on August 6, 1932.  He grew up in Borup, MN and later studied auto body repair in Moorhead. 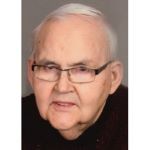 He was employed by the Corwin Churchill Company in Fargo, where he especially enjoyed painting cars.

Muriel Ann Jensen was born on June 14, 1946 to her proud parents, Kenneth and Luella (Lewis) Jensen.  She graduated, as Salutatorian, from Breckenridge High School in 1964.  Muriel continued her education at North Dakota State School of Science and Moorhead State College, receiving her degree in Medical Technology in 1968.  She began her career at St. Ansgar Hospital in Moorhead and later worked for Prairie Dental in Ada.

On June 23, 1973 Charles and Muriel were united in marriage at United Methodist Church in Breckenridge, MN.  They were blessed with two children, Karolyn and Gregory.  The couple made their home in Borup where he farmed for 40 years.  They kept busy with all aspects of the farm, as well as raising chickens for nearly 30 years.  Charles retired in the early 1980’s but continued to drive truck and help with harvest.  Muriel always had a large garden and canned her produce each season.  The family looked forward to their Sunday visits to Pelican Lake gathering at Aunt Bea’s, where Muriel would water ski and swim, while Charles watched from the boat.  Spending time with family and caring for their children was always a priority.  In her quiet time, Muriel would often play piano. Charles loved to fish, read, and watch classic detective shows on TV.  Muriel and Charles were both very active members at Zion Lutheran Church in Ada, helping with various committees and events over the years.  Muriel also served as congregation treasurer for quite some time.  Their faith was evident in every part of their lives together.

They were preceded in death by their parents; their daughter, Karolyn; and Charles’ brother and sister-in-law, Donald and Gloria Joop.

A funeral service will be held together for Charles and Muriel at 11:00 am on Friday, September 20, 2019 at Zion Lutheran Church in Ada, MN. Visitation will be held on Thursday, September 19, 2019 from 5:00 pm until 7:00 pm, with a Prayer Service beginning at 6:30 pm, all at the church. Burial will take place at the Ada City Cemetery.