Lawrence “Larry” Peterson, 78, of Lockhart passed away peacefully on September 20, 2019, in his home surrounded by his family.  He was born on March 10, 1941 to Lawrence O. and Theodora  Peterson in their home in Lockhart. 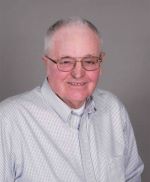 Larry was baptized and confirmed into the Christian faith at First English Lutheran Church, Lockhart, MN.

Larry attended Lockhart Elementary until the 8th grade. He transitioned up to Crookston A.C. where he graduated. After High School he was drafted in the Army. On March 12, 1966 he married the love of his life, Betty Jo Merkens and together they raised two children on the family farm.

He was very active in his church and community.  Larry was a life-long farmer and enjoyed spending time hunting and fishing.  He was a master of making anything out of metal.

A couple of days before his passing, he said, “I’m the luckiest man in the world to have a precious family who is there for me.”  His family meant everything to him.