John St. Marie, passed away peacefully on Friday, October 11, 2019 at his residence with his loving family at his side. 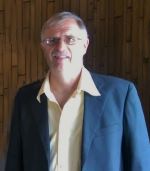 John Raymond St. Marie was born May 13, 1956 at Red Lake Falls, MN son of Raymond Philip and Odina Mae (LeFaivre) St. Marie. He was raised in Red Lake Falls and attended Lafayette high School graduating in 1975. He then went on to Chef training at East Grand Forks. John moved to Fargo where he worked at Sampson’s Night club and the Speakeasy in Moorhead. He returned to Thief River Falls in 1979.

On August 30, 1980 he was united in marriage to Kami Robson in Thief River Falls, MN. To this union  Zachary and Griffin were born. John worked at many places in the area including the Best Western, Evergreen, owned the Country Roads Supper Club in Red Lake Falls, MN, worked a short time at Mabel Murphy’s in Fergus Falls, MN also at Petro Pumper, 7 Clans Casino and from 2006 until his health forced him to retire in 2018 he worked at Valley Home and the Thief River Falls Golf club.

John helped his mom on catering jobs, he enjoyed attending hockey games, and golfing. He loved going to food shows and different catering jobs. He enjoyed working with his boys in the Kitchen. The Chautauqua French Festival was one of his yearly highlights, where he would cook for the attendees.

He is preceded in death by his parents, Odina and Raymond St. Marie, grandparents Joe St. Marie, Clem and Dulice Davis, Amelia LaFaivre and Louis LaFaivre.

Condolences may be sent at www.johnsonfuneralservice.com