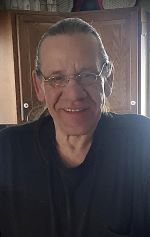 Larry was born at Fosston, MN on April 3, 1958 to Clayton and Norma (Larson) Monson. He was baptized and confirmed in the Lutheran faith and moved with his family to Crookston in 1963. Larry attended Crookston Schools and later earned his GED. While in high school he was employed at Red Owl Grocery and after his schooling he worked at various jobs. Larry then moved to St. Cloud, MN and received schooling to become a Chemical Dependency Counselor. He then provided counseling in St. Cloud, Bismarck, ND and the Twin Cities. On August 25, 1984 he was united in marriage to Roxanne Denne at St. Cloud. Four children were born to their union: Zachary Tyler, and twins, Emily and Maria. Several years later Larry returned to Crookston, making his home with his mother. He was employed by Wanzek Construction when they were building silos at the American Crystal Sugar Company; later worked for American Crystal; and then owned and operated his own taxi service in Crookston.

Larry was strong in his faith and was a member of Trinity Lutheran Church. He also led a group of friends in a Bible study group. He enjoyed tinkering and doing projects; fishing with friends; and watching the Minnesota Vikings. For the greater part of his life Larry had been dealing with addiction and mental health issues. He will be sadly missed by his family and friends.

The memorial service for Larry Monson will be held at 2:00 pm, Tuesday, November 26, 2019, at the Stenshoel-Houske Funeral Home in Crookston with Pastor Kevin Hackney, officiating. Visitation with the family will for one hour prior to the funeral. Inurnment will take place in the Oakdale Cemetery in Crookston next Spring.