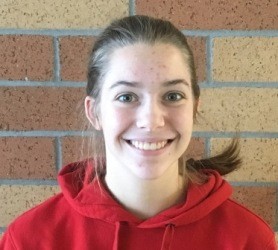 The KROX Radio Athlete of the Week is Crookston Pirate’s Girls’ Basketball player, Emma Borowicz, a 5’8 junior guard.
In the first game of the season, Emma reached 1,000 career points when she made a free throw for her seventh point of the game in the first half of a win over Sacred Heart.  Emma became the 19th Crookston Pirate Basketball player and 11th Pirate Girls Basketball player to reach the milestone.  Emma is one basket away from moving into the 10th spot in career scoring, a list that she will move up throughout her final two seasons.  Emma ended up scoring 13 points in the game.  On Monday, she scored 13 points in a win over Win-E-Mac and on Tuesday she scored 8 points, had six rebounds, four steals and two assists in a win over Red Lake Falls.  Emma is one of the many leaders on the team and leads more by example than with her words.  She works hard in the offseason and even harder during the season.   “Emma has had a great start to the season. She has been a key player for us as usual, but she has shown maturity as a player and as a leader which makes our team much better,” said Pirate Girls Basketball Coach Darin Zimmerman. “She is as dedicated of a player as I have ever coached, and I was very proud when she scored her 1,000th point. It was a little extra special for her and our team that she was able to do so in front of our home crowd.”
Emma has played varsity basketball since eighth grade and is averaging around 13 points per game over her young career.
Emma is a three-sport athlete and has played varsity tennis since eighth grade and advanced to the state individual doubles tournament with Catherine Tiedemann the last two years.  She has also competed on the varsity track team since seventh grade and competes in the 400, 4×400, 800, 200 and the pole vault.  Emma advanced to the State Track Meet last year after she won the 300 hurdles in the Section 8A track meet.
Emma is also a member of the LEO Club, student council, band and honor roll.

Part of your game that needs work – Communication

The biggest highlight in your career so far – The section championship game last year.

The last movie you’ve seen – The Spy Who Dumped Me

Favorite TV program – Don’t have one

What music are you listening to –  Anything on the radio

You’re stranded on a deserted island and you can have ANY three people with you – Mom, Dad, and the basketball team