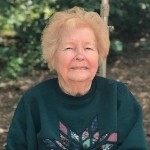 2020, with her loving daughters, Marsha and Nancy, at her side.

Rowena was born on September 30, 1917 at Ft. Griffin, TX, the daughter of William Riley and Ruth Lee (Thorp) Free. She was baptized and confirmed in the local Baptist Church and spent her first 2 years of elementary school in Ft. Griffin. She next attended public school at nearby Albany, TX, graduating from Albany High School in 1935. Rowena was then employed as a telephone operator for Southwestern Bell in Albany. Following a later move to Abilene, TX she worked in the Signal Corps office at Camp Barkeley, before transferring to the Camp’s Quartermaster’s Office. She soon met a young Crookston, Minnesota soldier by the name of Stanley Markwood Nelson. Rowena and Stanley were united in marriage at the chapel in Camp Barkeley on November 27, 1943. Following Stanley’s honorable discharge in December of 1945 the couple moved to Crookston where they settled to raise their 2 daughters, Marsha and Nancy, and son, Jan. From 1969-79 Rowena was employed as a bookkeeper for Northwest Lumber.

Rowena and Stanley were longtime members of the Wesley United Methodist Church. She also held memberships in the Crookston Women’s Club from 1963-2003 and the Riverview Auxiliary from 1980 -2005. Sadly, Stanley passed away on February 26, 1992. Rowena enjoyed many years of camping with her family including an outing just this past summer. She also had a lifetime passion for gardening, crocheting, reading, and solving sudoku puzzles. Rowena enjoyed playing cards with her grandchildren and great-grandchildren, even in her last days at the Villa, and was known to beat them more often than not. Sadness revisited Rowena and her family with the passing of her beloved son, Jan, on May 21, 2018.

Grateful to have had Rowena in their lives are her 2 daughters, Marsha Myrold and Nancy Vakoch (Larry Brule) of Crookston; 6 grandchildren: Erik (Marjorie) Myrold of Grand Forks, ND, Matthew (Rebeka) Myrold of Minneapolis, MN, Nathan (Jaime) Myrold of Maple Grove, MN, Andy (Britany) Vakoch and Sarah Vakoch (Justin Acord) of Lewiston, ID, and Nicole Garcia of Cameron Park, CA; 8 great-grandchildren: Brianna and Maddie Myrold, Elijah Ndosi, Reagan and Breccan Myrold, Atlee and Clancy Vakoch, and Lauren Garcia; 2 nephews, John Morrow of Throckmorton, TX, and Eddie Morrow in Baghdad, Iraq; and other relatives. In addition to Stanley, her beloved husband of 48 years and son, Jan, she was preceded in death by her parents, William and Ruth Free; brother, Dave Free, who was killed in action during WWII; sister and brother-in-law, Frances and Wayne Morrow; and son-in-law, Jim Myrold. May God richly bless the memory of Rowena Free Nelson.

The memorial service for Rowena Nelson will be held at 11:00am, Monday, January 27, 2020, at the Wesley United Methodist Church in Crookston with The Rev. Michelle Miller, officiating. Visitation with the family will be for one hour prior to the service. Inurnment will take place in Crookston’s Oakdale Cemetery in the spring.