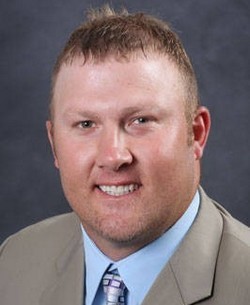 Schmidt just finished his sixth year as an assistant coach at his alma mater the University of North Dakota and will be the defensive line and special teams coach at Fresno State.
Fresno State hired Kalen DeBoer as their head coach in December after serving as their offensive coordinator in 2017 and 2018. DeBoer and Schmidt coached together at Southern Illinois under Dale Lennon starting in 2010.
Fresno State is a member of the Mountain West Conference along with Boise State, Air Force, Utah State, Wyoming, Colorado State, New Mexico, Hawaii, San Diego State, Nevada, UNLV and San Jose State.

Eric, a 2001 UND grad, is married to Crookston High School and the University of Minnesota Crookston graduate Tiffany Hasbrouck and they have three children.