The KROX Radio Athlete of the Week is Crookston Pirates Girls’ Basketball player, Hayden Winjum, a 5’10 Sophomore guard.  Hayden is coming off a tremendous week with 21 points, 16 steals, and 8 rebounds in two victories over Bagley and 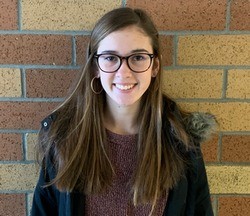 Park Rapids.  The sophomore is the defensive stopper for the Pirates and leads the teams in steals while using her long frame, athleticism and basketball smarts to torment opposing guards with her relentless pressure.  One of the more impressive things about Hayden’s defense is the lack of fouls she commits while playing in your face defense.
Hayden is averaging 10.2 points per game while shooting an impressive 51.5 percent from the field.  She is averaging six steals, four rebounds, and three assists per game and has a two-assist to turnover ratio, which is outstanding.
Having an athletic guard that is 5’10 with long arms and outstanding athleticism is a luxury, according to Pirate Girls Basketball Coach Darin Zimmerman. “Hayden is one of the best defensive players I have ever coached. She can guard any position and disrupts our opponent every night,” said Zimmerman. “Her offense is starting to emerge, and she is a threat inside and out. She is capable of scoring 15+ points each game. But as good as Hayden is on the court, she is better off of it. She is an outstanding person who places the team first every day.”
Hayden is in her third year of playing varsity for the Pirate Girls Basketball team.  She is also a three-sport athlete and, in the fall, was a member of the Girls Tennis program where she has played varsity since seventh grade and played a mix of first and second singles for most of the season.   In the spring, Hayden is a member of the track team where she competes in the 400, 800, triple jump, long jump and relays.  She has been on the varsity track team since seventh grade.
Hayden is also a member of the band, where she plays percussion.  She is a member of the Crookston High School Leo Club, Student Council, and is an honor roll student.

Part of your game that needs work – My three-point shot

Do you have a pre-game ritual – Not really

You’re stranded on a deserted island, and you can have ANY three people with you – My sister Halle, Amelia Overgaard and Emma Borowicz