Cecilia Lucille “Sis” Raymond, age 87, of Crookston, MN, passed away on Thursday, January 9, 2020, at Riverview Health in Crookston, MN, with her family by her side. 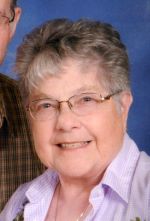 Cecelia Lucille Desrosier was born on January 22, 1932, on the family farm in Beltrami, MN, the daughter of the late Albert and Stella (Perreault) Desrosier.  She was raised in Beltrami and attended Country School District 256 and afterwards the St. Joseph Academy in Crookston, MN.  She then went to work at the Villa St. Vincent until June 1, 1950.  On June 21, 1950, she was united in marriage to Marlyn Raymond at St. Peter’s Catholic Church in Gentilly, MN.  The following January, Marlyn left for service in the US Army with the National Guard and Sis went back to live on the farm with her family.  Marlyn left the service on September 14, 1952, and the family moved back to Crookston.  Sis then worked at St. Francis Hospital from April 1956 to 1970, when she went to work for JR Simplot as a machine operator until it burnt down in 1979.  In November of 1979 she went to work for Pamida and remained until her retirement in 1994.  She was a devote Catholic, first belonging to St. Peter’s in Gentilly and then after marriage to the Cathedral of the Immaculate Conception in Crookston and belonged to the St. Rose of Lima Circle. She was an active member of the Eagle’s Women’s Auxiliary where she helped cook dinners and became a bartender in 1997.   Every Saturday evening Sis and her fellow Eagles Auxiliary members would put on suppers at the club, and Marlyn would be there to pour coffee while visiting with everyone.  Entertainment usually followed and he and Sis loved to show off their moves while dancing the night away with friends.  In her retirement she also volunteered for Home Delivered Meals and did many different jobs helping to tend the gardens at Mt. Saint Benedict.  She and Marlyn were both active members of the Golden Link Senior Center and in March of 1999 and they were honored as Crookston’s Experienced Americans during a reception held at the Link.  In her free time, she enjoyed fishing at the lake, going to the casino, and doing needlework, crocheting, and framing, but most of all she loved being with her family and making things they needed.  In 2015, she and Marlyn moved to the Good Samaritan in Warren, MN, until his passing in 2018, when Sis moved back to Crookston and lived in the Villa St. Vincent Nursing Home.

Sis is survived by her seven children and their spouses: Connie and Dan Erdman of Crookston, MN, Ken and Anita Raymond of Astoria, OR, Veronica and Larry Hasbrouck of Orlando, FL, Mike and Karen Raymond of Crookston, MN, Renee and Craig Caillier of Thief River Falls, MN, Nate and Nicole Raymond of Fargo, ND, and Stacy and Marlin Brule of Jordan, MN; 21 grandchildren; 32 great-grandchildren; a great-great granddaughter; siblings and their spouses, Robert and Delrose Desrosier of Richfield, MN, Edward and Deloris Desrosier of Roseau, Minnesota, Rita and Vern Plante of Crookston, MN, and Eloise and Jack Ganser of Stillwater, MN; and sister in law, Delphine Desrosier of White Bear Lake, MN; as well as many nieces, nephews, cousins, and friends.  She was preceded in death by her beloved husband Marlyn Raymond in 2018; mother, Stella Desrosier in 1955; father, Albert Desrosier in 1982; sisters, Joanne Rosenberger in 1995 and Alma Jensrud in 2014; brother Lawrence Desrosier in 2015; and stepmother, Dorothy Desrosier in 2004.

Mass of Christian Burial for Cecilia Raymond will be celebrated at the Cathedral of the Immaculate Conception in Crookston at 10:30 am, on Saturday, January 18, 2020, with The Very Rev. Vincent Miller, presiding. Visitation will be at the Stenshoel-Houske Funeral Home on Friday, January 17, 2020, from 5:00 pm – 7:00 pm, with a 7:00 prayer service and time of sharing, and will continue at the church for one hour prior to the funeral. Interment will be at the Calvary Cemetery in Crookston, MN, in the spring of 2020.

Blessed be the memory of Cecilia Lucille “Sis” Raymond.