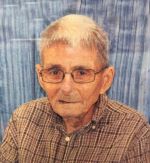 Donnie was born February 3, 1934 at home near Gary, MN, the son of Harry and Mabel (Roark) Grunke. He moved with his family to Ada where he attended school. He worked various jobs in his early years and eventually worked for the City of Ada. He took great pride caring for the parks and cemetery for many years until he retired in August of 1995. He lived in his house before moving to Valley View Manor where he resided for over 20 years.

Donnie had a strong faith and was an active member of St. Joseph Catholic Church and the Catholic Fraternal organization, Knights of Columbus. He enjoyed spending time with people and sharing coffee and meals. He was fond of country music and enjoyed singing karaoke from time to time. Hank Williams Sr. and Patsy Kline were some of his favorite artists. He loved traveling and occasionally made trips to Branson and Las Vegas. Donnie was a special friend to the Tammie and Chuck Ruebke family and would share holidays together. Recently his health began to fail and he moved to the care community.

Donnie is survived by the Ruebke’s and his many special friends. He was preceded in death by his parents and a brother, James.