The KROX Athlete of the week is Ethan Boll, a 6’1 182-pound Freshman on the Crookston Pirate Wrestling team.
Ethan is 28-4 on the year and currently has 74 career wins already in his young career. What makes Ethan’s career record even more impressive is that he started wrestling at 138 pounds in his seventh-grade year before he wrestled at 152, and 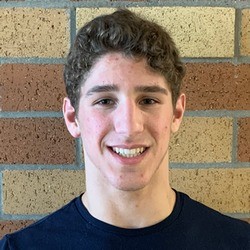 now he wrestles at 182 and has been wrestling against older opponents his entire career. “Ethan has stepped up for his team by his willingness to move up weight classes to help us get the best matchups and ultimately set our team up for winning duals,” said Pirate Wrestling Coach Wes Hanson.  “In a big section matchup last week, Ethan was able to pin the #9 ranked wrestler in the state from Fosston-Bagley to seal the dual victory. That was a big-time win for him and our team. He followed up that performance with a big win by scoring late in the 3rd period to take the lead and ride out for the win against H-CV last Thursday. Ethan has done a great job of winning the close matches and being a leader on and off the mat.”
Ethan is looking to follow his father’s footsteps and make a trip to the state wrestling tournament.  His dad, Brian, finished fifth place at state in 1992.
Ethan is a three-sport athlete, playing football in the fall and baseball in the spring.  In football, Ethan has played on the varsity for two years.  As a Freshman this fall, he led the team in carries and rushing yards with 190 carries for 714 yards.  He also led the team with six touchdowns.  Ethan also had two receptions for 17 yards. On the defensive side of the ball, he had 44 defensive points and one fumble recovery.  In baseball, he is a pitcher and a catcher and will look to break the varsity line up this spring.
Ethan is also a member of the Crookston High School Leo Club, he plays the Tenor saxophone in the band and is on the honor roll and had a 3.89 GPA last semester.

The best part of your game – My physical strength

What music are you listening to –  Country

Something about you that people don’t know – I enjoy working for my Dad.

You’re stranded on a deserted island, and you can have ANY three people with you – My Dad, Mom, and Grandpa