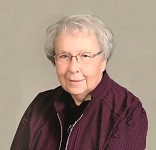 Sharon Diane (Felske) Erickson was born on January 26, 1944 to Rolland and Edith (Geddes) Felske. She was baptized at First English Lutheran Church of Lockhart, attended elementary school in Lockhart and graduated from Ada High School in 1962.

On June 27, 1964, Sharon was united in marriage to Philip W. Erickson at Grace Lutheran Church in Ada. She graduated from Concordia College in Moorhead, MN in 1966 with a degree in Mathematics education and a minor in French. In the spring of 1967 Sharon and Phil Erickson moved to the farm near Lockhart and raised their three children.

She taught math in Lake Park, Twin Valley and substitute taught for many years in Ada. She also taught in the after-school Cougar Connection program in Ada for several years until she was diagnosed with breast cancer 10 years ago. She served multiple terms as church treasurer and secretary. She was also a member of GLCW, Homemakers, 2-3 and the Grace Lutheran bell choir. Sharon was also an avid Cougar sports fan.