The KROX Radio Athlete of the Week is the University of Minnesota Crookston Golden Eagle Baseball player, Brock Reller, a 6’3, junior, outfielder, from Grand Forks, North Dakota.
Reller was named NSIC player of the week this week after batting 11-of-19 for a 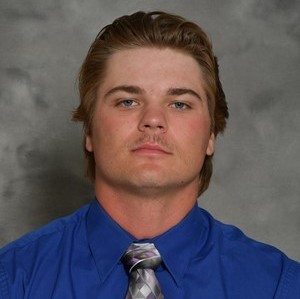 .579 batting average while UMC went 3-1 in Florida during that span. Reller connected on three home runs, had nine RBI, eight runs scored, and two triples. Reller is hitting .360 during the season and has helped Minnesota Crookston enter NSIC play with an 8-5 record. Reller has five home runs this season along with 17 RBI and four triples with 15 runs scored. “The first part of the year he wasn’t himself,” noted UMC head coach Steve Gust. “He wasn’t as good as he’s been recently. He’s put a lot of time and effort into things and it’s really paying off. The thing that he’s able to do really well now is make adjustments at the plate. Before you kind of had to tell him what he needed to do and now he’s figured it out himself. It’s making him a great hitter right now.”
Reller transferred to UMC last season finishing ninth in the NSIC with 9 home runs as a sophomore hitting .284 with 37 runs scored and 47 RBI. Reller began his collegiate career at Iowa Central Community College scoring 14 runs with three doubles and 13 RBI as a freshman. Prior to Iowa Central, Reller was a two-time All-State selection at Grand Forks Central High School in baseball while also earning All-State honors in hockey.

What music are you listening to –  Nickleback

You’re stranded on a deserted island and you can have ANY three people with you –  Mason Ruhlman, Clark Peterson, Connor Richardson