We are a month into the COVID-19 pandemic and the stoppage to the sports world.  All of us have pretty much figured out there won’t be a spring sports season.  Several summer athletic activities have been canceled already.  We are heading L.A. saying they likely won’t host a sporting event until 2021.  New Orleans saying they won’t be hosting a sporting event this year, and many other places.  If sporting events are held, they won’t have crowds watching the games.

Many people have said they don’t think the football season will start on time.   We will see what happens, but be ready for the lack of high school sports.

We have been playing back Classic Crookston Pirate games this week and they have been extremely well received.  It has been a blast listening to the games.  Coming up on Friday, we will have the 1980 Class A Football State Championship game between Crookston and Pipestone.  The game was played in Crookston.
Crookston was 10-0 coming into the state tournament and beat Park Rapids 19-8 in the first round.  In the semi-finals, the Pirates beat Rochester Lourdes 35-12.  In the championship, Crookston beat Pipestone 32-6.

The crazy thing that many might not remember is that the Catholic School in Crookston, Mount St. Benedict went to state in Nine-man the same year!  The Mount’s enrollment was 230 and Crookston Central’s enrollment was 516.

Crookston Central was coached by Hall of Famer Les Drechsel (it was his 24th year and he was 65-27-1 in those 24 years). The assistant coaches were Jim Simon, Jim Myrold, Rodd Olson, and Gary Vorachek.
The Mount St. Benedict was coached by Mike Finco (his 3rd year) and he was assisted by Fran Finco (who was also the A.D.).

Dan Crane (a member of the 1980 Pirate football team) dropped off the 1980 State Football program and game recording and it was a lot of fun to look through the program.  I scanned the two Crookston teams along with McIntosh-Winger and Mahnomen team pages from the program below.

Last week we had a picture of the Crookston Pirate Softball seniors and asked for any coaches, parents, and students to send us pictures of their teams, seniors, or whoever.

This week we have the Fertile-Beltrami Boys and Girls Track teams.  We received it from Coach Brian Nelson –

Chris, read sports fever this week and saw you were looking for some spring sports pictures.  Here is the 2020 Fertile-Beltrami 7-12 boys and girls track teams. We quick took a picture the Tuesday before our shutdown/and wait season (have a few missing in pic).  We are distance coaching them right now and are hopeful we can get back at it May.  Thanks and hope you and your family are safe and well.   Our distance coaching motto has been   “Stay Safe, Stay Active” 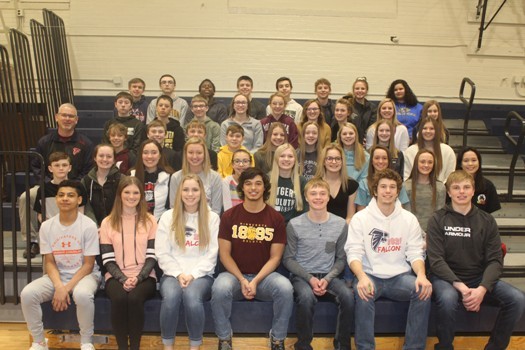 Send your pictures to chrisjfee@yahoo.com and we will post them each week!

There is a local tie-in with Perunivich.  Hibbing and Crookston played in boys tennis a couple of times and I remember the one match at state where Crookston’s Bobby Tiedemann took on Perunovich.  Both had shoulder injuries (Bobby’s from spring hockey and Perunovich’s from playing slowpitch softball – Yep…you read that right) going into the state tournament and Bobby won in a three-setter.  The two met the next year as seniors and Bobby won a three-set match 6-7, 6-3, 10-3.

I was looking through some old recordings last week and came across an interview I did with Kevin Garnett (now a hall of famer) in October of 2004 when the Timberwolves played an exhibition game at the Alerus Center in Grand Forks.   I did a short three-minute interview with KG after the game and it is below.  My sixth-grade son, Carter, now thinks his dad is pretty cool!!

Several Minnesotan’s are ranked in the Central Scouting Final rankings. Nobody from Northwest Minnesota was in the top 150, but Warroad’s Grant Slukynsky went from being unrated before the year started to 152nd after scoring 30 goals and recording 101 points on the season. Slukysnsky will be going to Northern Michigan next year.
Thief River Falls’ Evan Bushy is ranked at 156th and will be playing at St. Cloud State.

Due to the quarantine…
I’ll only be telling inside jokes.

Mildred, the church gossip, and self-appointed monitor of the church’s morals, kept sticking her nose into other people’s business. Several members did not approve of her extra-curricular activities, but feared her enough to maintain their silence.
She made a mistake, however, when she accused George, a new member, of being an alcoholic after she saw his old pickup parked in front of the town’s only bar one afternoon. She emphatically told George (and several others) that everyone seeing it there would know what he was doing.
George, a man of few words, stared at her for a moment and just turned and walked away. He didn’t explain, defend, or deny. He said nothing.
Later that evening, George quietly parked his pickup in front of Mildred’s house, walked home, and left it there all night.

After I warned the nurse taking blood that it would be very hard to find a vein on me, she said, “Don’t worry. We’ve seen worse. Last year we had a girl come in to get a blood test for her marriage license and we had to stick her six times in four places before we got anything.”
“Yes, I know,” I said. “That was me!”

How are former Crookston Pirates athletes doing in college or elsewhere?
****LET ME KNOW OF OTHERS TO ADD TO THE LIST email me at  chrisjfee@yahoo.com

Paul Bittner is playing for the Cleveland Monsters, the AHL affiliate of the Columbus Bluejacket.

Brady Heppner, is playing hockey for the Roanoke Raildogs in the SPHL.

Aleece Durbin, is a Sophomore on the University of North Dakota Women’s Track and Field team.

Brita Fagerlund, is a Junior on the University of Jamestown Jimmy Women’s Track team.

Ben Trostad is a sophomore member of the University of Minnesota Crookston golf team.

Isaac Westlake, is a Senior on the Winona State Warrior Men’s Golf team.

Elise Tangquist, is a Junior golfer for the University of Northwestern in St. Paul.

Mason LaPlante, a freshman, is playing soccer at the University of Jamestown.

Rachel Hefta, a freshman, is playing volleyball at Hastings College in Nebraska.

Cade Salentine is a redshirt Freshman playing football at the University of North Dakota.

Nick Garmen, is a freshman playing basketball and tennis at the University of Minnesota Morris.

Thea Oman, a freshman, is swimming at St. Ben’s.

Cody Weiland is an assistant wrestling coach at Proctor/Hermantown

Justin Johnson is an assistant softball coach at the University of Minnesota Crookston.

Matt Harris, is a Director of Athletics at the British International School of Houston.

Stephanie (Lindsay) Perreault works with the North Dakota State stats crew for Bison football and volleyball and basketball in the winter. Stephanie’s husband, Ryan, is the assistant director for the Bison media relations

Jason Bushie is the hockey athletic trainer at Colorado College

Jarrett Butenhoff is serving our country with the U.S. Navy

Peter Cournia is a 2002 Crookston High School Graduate and also a grad of West Point and is currently is serving in the U.S. Army.

Philip Kujawa class of 2004 from Crookston High School.  He is an Army recruiter in Rochester.

Scott Riopelle is head of Crookston Parks and Recreation

That’s it for this week.  Thanks for the comments and if you have anything to add or share, please e-mail chrisjfee@yahoo.com or call.  Thanks for reading and listening to KROX RADIO and kroxam.com