Ronald Lee Beauchane, 74 lifelong resident of Red Lake Falls, MN passed away peacefully at his rural residence May 27, 2020 after spending the day in the outdoors surrounded by his loving family from advanced Dementia.

The funeral service will be held at St. Dorothy Catholic Cemetery, Dorothy, MN on Wednesday, June 3, 2020 at 3:00 PM following all MN and CDC Covid-19 requirements. Please feel free to bring a 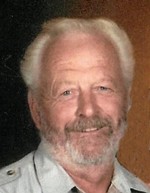 lawn chair and umbrella. A light luncheon and memorabilia will follow the service at the Beauchane farm.

Ron was born June 3, 1945 in Crookston, MN son of Alton (Sorenson) and Solange (Asselin) Beauchane. He attended grade school in Louisville Township, later attending one year in Red Lake Falls and going on to graduate from Northwest School of Agriculture, Crookston, MN. While at Crookston one of his greatest achievements was wrestling and becoming the Co-Captain of the wrestling team.

Ron attended one year at Bemidji State College and then joined the United States Navy, enrolling in electronics school to become a communications technician, while serving 4-1/2 years, he was stationed in San Diego, Aleutian Islands, Alaska and with the US Naval Security Group Activity, Todendorf Germany.

Following his honorable discharge from the Navy Ron attended Mankato State College for one year alongside his lifetime friend Drew Larson of Red Lake Falls, MN.

Ron married Monica Dufault in Crookston on September 22, 1973, together they raised 3 children Ann, Justin and Christopher. Ron began his many years of craftsmanship as a carpenter alongside his father and mother building and remodeling houses. Later going on to work at Detroiter Mobile Homes as their on-the-road serviceman. When they started a family Ron began working for Pro Builders with Alois Schmitz. There he met Jim Schmitz who became his longtime friend as their young families joined together on several occasions. Later Ron and Jim worked for Agassiz Construction and Ron retired after 30 years with ICS of Grand Forks, ND.

Ron had a profound love for the outdoors. He enjoyed fishing trips to their cabin at Waskish, yearly deer hunting with his family and cousin Gene Sorenson, and snowmobiling with Rick (Sweeny) Swendra.

Family condolences may be sent to www.johnsonfuneralservice.com