The sugar beet harvest pre-pile began last week, and the early indications are 2020 should be a good crop.

Last fall, local producers dealt with not only wet conditions but low temperatures.  A wet spring also pushed the planting day back this spring, but Ptacek said if the heat can continue through September, it could be a nice crop this season. “We finished the year last year on a very wet and frozen note,” said Ptacek. “Moving into the spring this year, it was wet, and a little bit later start than the five-year average as far as our planting date went. The seedbeds were wetter and clumpier.  We started with a little bit thinner stand than we wanted but acceptable. A very warm summer we’ve had with ample moisture, and the crop progressed nicely. We’ve got a good crop coming, not going to say it’s a record-breaker, but it’s a good crop. If we continue to get the heat units through September, it’s going to be a real nice crop.”

There are pockets of root rot thanks to some heavy rains in late June and early July; however, it’s not widespread, according to Ptacek. “We’ve got plenty of moisture in the ground,” said Ptacek. “We don’t need anymore. The heavy moisture events at the end of June and the beginning of July, where we ended up with some ponding water and ditches overflowing into fields is where the rot showed up. It’s been pretty good conditions since then, and the rot never got a chance to spread. We know we’re going to have a little bit of root rot in these fields from observations, but so far on pre-pile, the beets have been pretty good in the Crookston District.”

Spraying sugar beets began around the Fourth of July and continues every 12-14 days to keep the leaves green to soak up the sun, which produces more sugar and mass on the root. Farmers spray their crops to stave off the Cercospora leaf spot and keep those leaves green, explains Ptacek. “As far as disease goes, there are some pockets of root rot,” said Ptacek. “It’s not widespread, but a little bit is showing up. And our Cercospora leaf spot is our big one right now. Guys are on their spray programs and managing them to coincide with their pre-pile dates as well. They should be finishing spraying their fourth application this week or next week, and possibly do a fifth if the heat stays around.”

Harvest season is probably the busiest and most dangerous time of the year on roads around Crookston, and Ptacek reminded everyone to keep an eye on each other and have a safe harvest. “The only thing I would add is safety on the roads,” said Ptacek. “There is going to be a lot of trucks moving whether its beet harvest or other grain harvests going on in the next month and a half. Keep an eye on safety, and let’s have a safe harvest.” 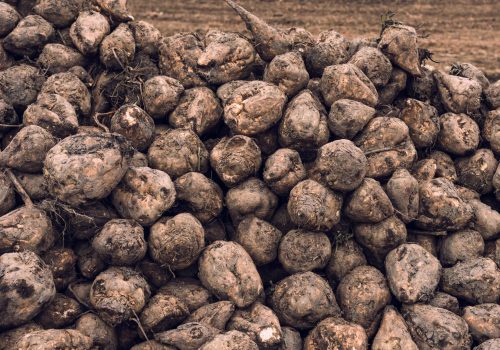