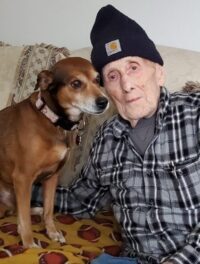 Gary, a native of Grand Marais, MN, was born there on May 15, 1940, to Leo and Lois (Kimball) Cogley. On August 5, 1958, he entered the US Army and served overseas during a portion of his tour of duty. Gary received his honorable discharge on May 16, 1961, while stationed at Fort Hamilton, NY. He then moved to the west coast where he worked for several years as a logger in the states of Washington and Oregon. After spending time traveling throughout the country he eventually settled in Crookston. Gary was first employed as a custodian at the Care and Share Center and later for DEE Inc. from October 1994 until his retirement on January 26, 2007. To anyone who has visited Crookston’s Oakdale Cemetery over the past several years Gary and his pet dog, “Bubba” were a familiar sight as they would leave their nearby apartment building to walk the cemetery roads.

Gary will be sadly missed by “Bubba”; also his good friend, Dan Kawlewski, who he first met at DEE; and many others whose friendships he enjoyed while working there. Gary was preceded in death by his parents; and an uncle, Ken Cogley.

A graveside service for Gary LeRoy Cogley will be held at 10:00 am, Wednesday, October 14, 2020, at the Oakdale Cemetery in Crookston officiated by Trey Everett, Celebrant. Military Honors will be provided by the Crookston Veterans Council and the MN National Guard Honors Team from Moorhead. It is recommended that all in attendance wear masks.