Jerome Neil Ness, 86, lifelong Fisher, MN resident and farmer, passed away early Saturday morning, November 7, 2020, at the Halstad (MN) Living Center where he had been living since December of 2017.

Jerome was born on his parents’ farm in Roome Township, 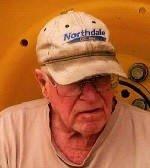 near Fisher, on March 5, 1934, the youngest of two sons of the union of Ole and Esther (Gutterud) Ness. He was baptized and confirmed at the Fisher Lutheran Church and graduated from Fisher High School in 1954. He went on to attend the University of Minnesota, School of Agriculture, in Minneapolis, before entering the US Army on September 18, 1956. Jerome was stationed in Germany at the Head Quarters of Battery V Artillery for much of his tour of duty. Upon his return to the States he received his honorable discharge on June 17, 1958. Jerome farmed with his father and a year later, on August 29, 1959 was united in marriage to Joan Yvonne Siverson at the Fisher Lutheran Church. Their marriage would be blessed by the births of 4 children: Joel, Janeen, Rick, and Kyle. From 1959 through 1974 Jerome worked during the winter months as a lab technician for American Crystal Sugar. While he retired from farming in 1999, his love for the land did not end until his last breath. Joan passed away on November 20, 2013.

As a lifelong member of Fisher Lutheran Church Jerome served on the Board for several years. He also served on the Boards of Fisher Public School District #600, the local Farm Bureau, and was a longtime member and holder of several offices in Fisher’s Theodore Stalemo American Legion Post #242. Jerome had a lifelong love of sports, whether it be watching as a fan, or playing baseball, basketball, and softball as he did in his younger days. May God bless his memory.