Lyle was born on April 20, 1927 in Minnesota; the son of Carl and Regina (Korsgarden) Jensen.  He grew up on the family farm east of Twin Valley, Minnesota and lived there 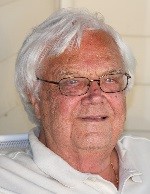 through the seventh grade where he had to milk three cows prior to walking a quarter mile to a one-room schoolhouse. The family then moved to Twin Valley where he attended high school. He participated in all sports and extracurricular activities. He was elected captain of the football team his senior year and was chosen to play in the state tournament but was unable to do so because he was drafted into the military.

He was drafted into the Army and served a year and a half in the European theater operations in the special service branch in Germany and Austria. He was honorably discharged and immediately attended Concordia College Moorehead, MN.

While in college he became a member of Delta Rho honorary society. Upon graduation in 1950 started working for Firestone Tire Company. He had management / sales assignments throughout the United States including North Dakota, Illinois, Colorado, Virginia and California, among others Lyle retired after 35 years; started his own business, Jensen Enterprise, and continued that until his death.

He was preceded in death by wife Nancy (1973), wife Donna (2010), Daughter Kassie, Grandson Brian and Granddaughter Julie. He is survived by children Kathy, Dan, Lisa, Nancy and Laura; 11 grandchildren and many great-grandchildren. He will be interred at Wild Rice Cemetery in Twin Valley.