Fred Eldon Miller passed away at Heritage Living Center, Park Rapids, MN on November 6, 2020 at the age of 82.

Fred was preceded in death by his parents, Fred and Nell Miller, brother, Kent Miller and 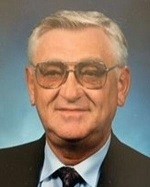 Fred was born in Staples, MN on January 22, 1938. He attended Country School District 9 and graduated from Verndale High School in 1956. Following graduation, he worked at the taconite plant in Silver Bay, MN and then enlisted in the United States Army on January 22, 1957. Following his discharge from the army in 1959 he returned to Silver Bay until 1961 when he enrolled at Moorhead State University and later transferred to St. Cloud State University where he graduated in 1965 with a Bachelor’s Degree in education and his Master’s Degree in 1972 from Bemidji State University.

On December 30, 1961 Fred was united in marriage to Janice Vandree of Moorhead, MN. In 1965 he began his 32 year career teaching in the Crookston Public Schools. He was also very active in the community coaching hockey, football and participating in various roles at St. Paul’s Lutheran Church. He and Jan enjoyed motorcycling through the U.S. western mountain ranges and snowmobiling with friends in northern MN lake country.

Following retirement Fred and Jan moved to their lake home near Akeley, MN. Although Fred was seriously injured in a car accident in 1998, he recovered enough to travel throughout the United States for several years enjoying several trips with friends and family and visiting their two children and four grandchildren.
A celebration of life will be arranged at a future date.

In lieu of flowers and in honor of Fred’s memory, donations made to CureDuchenne at cureduchenne.org and Hope Lutheran Church of Walker, MN, are appreciated.