It seems a roundabout could be the next preventive measure taken to reduce the number of severe crashes at the U.S. Highway 75 and County State Aid Highway 21 intersection north of Euclid. According to Polk County Highway Engineer Rich Sanders, the number of severe crashes is on the rise at the intersection. “MnDOT and us are having discussions about what we need to do at that intersection because the crashes have picked back up again,” said Sanders. “We haven’t had a fatality there yet, but we’ve had serious injury crashes happening. And, so, we’re looking at possibly putting in a roundabout at that location. It will make it more efficient and safer for all the traffic going through that intersection.”

The danger at the intersection is right-angle, or t-bone crashes. Sanders said previous safety measures such as the warning lights at the intersection are having a reduced effect on safety than when they were first installed. “In the past, we’ve had a lot of right-angle crashes at trunk Highway 75, north of Euclid, and County State Aid Highway 21, which is the St. Hilaire road,” said Sanders. “To prevent those crashes, we put in a RICWIS (Rural Intersection Conflict Warning System) sign, which is the signs that were put up that tell you traffic is entering the intersection as you’re entering the intersection. That was supposed to make that intersection safer for the traffic on County Road 21. Like most things, people have become familiar with the system, and now, it’s no longer working as effectively as it did when we originally installed it.”

The roundabout would be designed to slow down traffic and reduce right-angle crashes. Sanders said the roads would be realigned slightly to produce S-curves ahead of the roundabout to reduce speeds. “We already have intersection lighting there,” said Sanders. “So, more than likely, we wouldn’t have to add any more. We’d just have to move them to a different location. The railroad crossing to the east of the intersection would end up getting signals and lights instead of the stop signs. So, people wouldn’t have to stop at the tracks until the signal is turned on and the gates lowered. We’d do a little bit of realigning of HWY 75 north and south of the roundabout. CSAH 21 would stay pretty much on its alignment, maybe a little to the west because you don’t want traffic coming into the roundabout at 55 mph, so you give them a little bit of an S-curve coming in to slow them down. The design speed through the roundabout would be 25-30 mph speed. So, traffic on CSAH 21 would get through the intersection quicker and safer, traffic on HWY 75 would get through safer because they don’t have to worry about getting in a t-bone crash anymore, but they would have to slow down.”

A roundabout would still be a couple of years away from being built as the county can’t apply for federal Highway Safety Improvement Program funding until September 2021. The project would also need to be designed after funding is approved.  Sanders said he’d anticipate getting about $400,000-500,000 of the county portion of the project funded through the Highway Safety Improvement Program, with the state getting a similar sum. “The total cost for the roundabout itself is about $900,000, is what we’re estimating,” said Sanders. “To redo the legs of HWY 75 and CSAH 21 will probably be another couple hundred thousand dollars. If the State and us get about $800,000-1 million between the two of us, we’re probably looking at $400,000-500,000 split between the two entities for the remainder of the project.”

CLIMAX BRIDGE GETS SOME FUNDING, SANDERS HOPEFUL FOR NIELSVILLE GRANT
T
he County Engineers from around Minnesota recently allocated their federal funding for projects, including providing the federal portion of the Climax Bridge funding, explained Sanders. “The Climax Bridge was allocated $1.84 million in federal funding,” said Sanders. “So, we got the first bunch of money to replace that bridge. Now I have to work with our state legislature to come up with the rest of our portion. We’re looking at about a $5 million project on the Polk County side for that project. I’m hoping to work with Senator (Mark) Johnson, and Representative (Deb) Kiel we can come up with a good chunk of extra bonding money for our portion of the project.”

The expense of the bridge project would be split between Polk County and Traill County in North Dakota. Sanders said that despite the federal allocation being for 2025, both counties are hoping to start construction sooner. “Traill County and Polk County have said we want construction to start in late 2023, if not early 2024,” said Sanders. “That’s what our target deadline is. The federal money is 2025 money, which means it becomes available in October of 2024. But we can also advance construct it. So, if we wanted to start in the Fall of 2023, we could get the money from our state aid system and get it paid back from the feds in 2024.”

Polk County will also continue to apply for a BUILD Grant from the U.S. Department of Transportation for the Nielsville Bridge. Sanders said Polk County has been closer to receiving the grant the last couple of years. The Fisher Avenue project in Crookston also goes out for bid on December 30, with the bid opening scheduled for 10 a.m. on January 29. 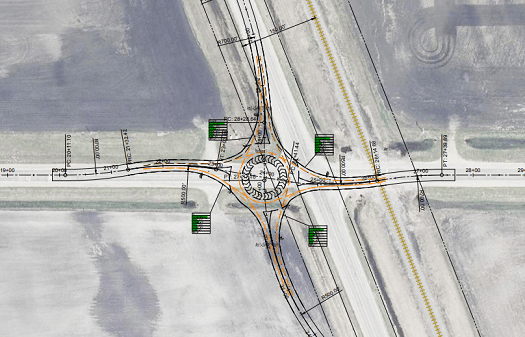