Matthew “Matt” Bishop, age 31, of Blaine passed away peacefully surrounded by family on Tuesday, December 29, 2020 and is now with his heavenly Father.

Matt will be deeply missed by his loving and devoted wife, Katie Bishop; parents, Mike and Cathy Bishop; father-in-law and mother-in-law, Pete and Mary Houdek; grandparents, 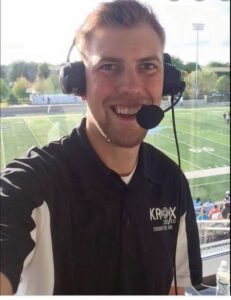 Preceded in death by his grandparents, Bob and Karen Bishop.

Matt’s family extends a heartfelt thank you to the doctors, nurses and staff of the Bone Marrow Transplant (BMT) unit at the U of M Hospital, The BMT Clinic, Masonic Journey and Cancer Clinics, DaVita Kidney Care in Blaine, and Fairview Hospice for their wonderful care and support given to Matt throughout the years.

Matt was a hard worker and had many jobs in high school and college. After college, his path to continue in broadcasting was halted by his first cancer diagnosis of non-Hodgkin’s Lymphoma in October 2012. He was declared cancer-free October 23, 2014.

Matt began his broadcasting career at KROX in Crookston, MN as an on-air host and sports play-by-play for both the local college (Golden Eagles) and high school (Pirates). He fell in love with the people and made friends fast. During this time he was introduced to the love of his life, Katie. While they were dating, after 14 months of being cancer free, he was fighting the same cancer battle again. After intense treatments he was cancer free for the second time. On May 6, 2016 he received a bone marrow transplant (BMT) at the U of M Hospital.

Post BMT there were many highs and lows. Matt and Katie were engaged, and married. His passion for Christ never wavered. He was able to spend time with family and friends, and remained cancer free.

The medical complications that followed transplant were fierce and frequent. A rare blood disorder was discovered. He was unable to continue with his passion in radio.

In the end, his blood disorder led to his final hospital stay. He was able to return home and spend his last days surrounded by his family. His passion for Christ, love of his wife, family, and friends were ever present throughout his journey. He lived life well!

A Celebration of Life Service for Matt will be held in the future when it is safe for us to gather again.

Memorials requested in Matt’s honor to charity of donor’s choice.