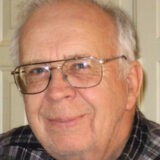 Herb Dahlen was born January 30, 1933, the son of Julian and Clara (Ryding) Dahlen in Borup, MN. He attended country school between Borup and Twin Valley. Herb enlisted in the United States Army on March 18, 1953. He spent his time stationed in Germany. After he was honorably discharged in 1955, he worked at several area farms in the community. In 1956, Herb was married to Karol Holznagel in Moorhead, MN and they were blessed with three children. In 1971, they purchased a farm east of Faith, MN, where they made their home and raised their family. After retirement, Herb rented his farming land to an area farmer but continued to live there. In 2010, he moved into Twin Valley where he has lived until recently becoming a resident of Fair Meadow Nursing Home in Fertile.

Herb often spent time going on long drives viewing the area crops and visiting with friends. One of Herb’s greatest passions was horses. He enjoyed spending time with the animals, training, and attending horse shows, as well as sharing this hobby with the younger generation. He will be missed by all who knew him.

Herb is survived by his son, Coe (Glenda Williams) Dahlen of Gastonia, NC. He is preceded in death by his two sons, Michael and Perry; and his parents, Julian and Clara.

Following all Covid-19 safety protocols, social distancing will be practiced, and all must wear a mask to participate.