Robert was born on June 7, 1941, in Crystal City, TX, one of four children of the union of Mercede and Antonia (Torres) Gatica. He was raised and educated in Crystal City and on April 1, 1959, was united in marriage to the love of his life, 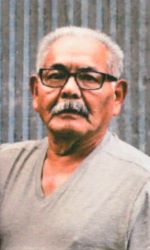 Idalia Cuellar. Robert and Idalia first lived in Crystal City and through the years their marriage would ultimately be blessed by the births of 7 children: Robert Jr., Corina, Juan, Chris, Michael, Adrian, and Scott. Following a move to Ohio, the family came to Crookston in 1991. Robert worked very hard as a seasonal farmworker. After settling in Crookston he was employed on several farms including those of Albert and Dennis Brekken, Duane Myron, and Kevin Ross. He developed lifelong friendships with these men and their families that continued even after his retirement and until his passing. He had also worked during the off-seasons for Crookston businesses, Dahlgen’s and New Flyer.

Robert will best be remembered by his family as a “Man of God” who loved nothing more than living his faith and spreading the Word of God to his Spanish friends in the area. As a servant of the Lord, Robert reached out to others while visiting churches and private homes. His generosity knew no bounds and he would gladly give his last dollar or piece of warm clothing to anyone who needed it more than him. Whether it was a family get-together while going back to Crystal City to visit, or hosting gatherings in Crookston, Robert loved his family with all his heart. He was very saddened by the passing of his dear wife, Idalia, this past November 22, 2020. They are now reunited which brings such comfort to his children and their families.

In addition to Idalia, his beloved wife of 61 years, Robert is preceded in death by his parents, Mercede and Antonia Gatica; parents-in-law, Santiago and Josefa Cuellar; brother-in-law, Armando Cuellar; and sister-in-law, Minerva Gutierrez. Blessed be the memory of Robert Gatica.

The funeral service for Roberto Torres Gatica Sr. will be at 11:00 a.m., Friday, July 2, 2021, in the Stenshoel-Houske Funeral Home in Crookston, MN Visitation will be for one hour prior to the funeral. Interment will follow in the Oakdale Cemetery in Crookston, MN. The service will be live-streamed by going to Robert’s obituary page at www.stenshoelhouske.com and clicking on the prompt to watch.

Online registry and messages of condolence may be made at www.stenshoelhouske.com