Frederick was born on September 4, 1962, in Spokane, WA, the son of Dean and Sydnee (Bambino) Ose, and was raised in Crookston, MN.  He attended Crookston Schools and after school, he went straight to working.  He worked at various jobs across, the US, including driving for his father and as a farmhand when he returned to Crookston working for Brekken Farms.

Fred was a dedicated family man.  He was married to Deborah Smart on July 8, 2006, and though he had no children of his own he helped to raise many of his grandchildren and was a devoted hands-on dad.  He helped raise Salome “Brandon” and Samuel Hinojosa and they turned out to be amazing young men.  He also loved tinkering in his man cave (garage) on motorcycles, cars, and snowmobiles.  While he was doing this the area could hear his love of music from AC/DC to Disco. 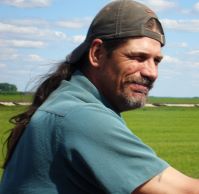 A memorial service celebrating Fred’s life will be held at 2:00 pm on Friday, August 13, 2021, at Stenshoel-Houske Funeral Home in Crookston, MN, with a time for visitation one hour before.