Mark A. Ellegaard, 58, Fertile, MN, passed away unexpectedly at his residence in Fertile on Wednesday, July 21, 2021.

Mark was born on September 18, 1962, at St. Francis Hospital, Crookston, MN to Walter and Carol (McArthur) Ellegaard.  He was baptized, made his first communion, and was confirmed at St. Joseph’s Catholic Church in Fertile, MN.  He attended Fertile-Beltrami High School, where he participated in wrestling and football.  He was also a boxer for Golden Glove, out of Crookston, MN during his high school years.  Mark lived and worked in different places throughout the country, from 1981 to 1992, most notably Florida, California, and Hawaii.  Mark moved back to Minnesota in 1993 where he worked at Marvin Windows in Warroad for 16 years.  Here he raised his son during his early elementary school years and made lifelong friends.  Mark eventually returned to his hometown of Fertile and worked at Lucken’s Trucks and Parts in Winger for several years, until his retirement in 2011. 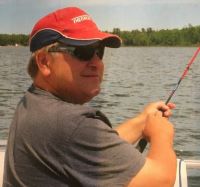 Mark (Hardy) will be most remembered for his kind and gentle heart, and always believing in the positive energy of those around him.  He would often offer a palm reading to anyone around and had many stories of his Glory Days that he would relive often.  He loved time with family and friends, especially fishing trips in Warroad, spending time at South Twin Lake, and dreaming of returning to the pier in San Clemente one last time.  Hardy had a heart of gold and would always have special treats for his nieces and nephews when they would come to visit.

Mark is preceded in death by his parents, Walter and Carol, his brothers, Bruce, Grant, and Barry, his grandparents, as well as several aunts and uncles.  He is survived by his son, Brandon; his sister, Shelly (Mark) Broden; brother, Eric (Joan) Ellegaard; and sister-in-law, Mary Beth Ellegaard (Barry); as well as several nieces and nephews.  God Bless the memory of Mark (Hardy) Ellegaard.

Memorial Service: 2:00 PM, Friday, August 6, 2021, at Erikson-Vik-Ganje Funeral Home, Fertile, MN, with visitation for one hour before the memorial at the funeral home.