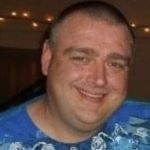 Brian Jerome Adelman was born June 20, 1972, at St. John Hospital in Red Lake Falls, MN son of Duane and Margaret (Lieske) Adelman. He was baptized and confirmed at St. Joseph Catholic Church. He attended St. Joseph School through the 6th grade, graduated from Lafayette High School in 1990. He worked at Dee Inc. in Crookston for 12 years. He was unable to work at Dee Inc due to health issues.

He attended East Grand Forks Northland College graduating in 2009 with a 4.0 GPA and Double Honors with a degree in Accounting. Later in 2009, he began working for Dahlgren in Crookston where he worked for 4 years. On September 15, 2014, he began working at Digi Key in Thief River Falls, MN as a supervisor in the accounting department, where he worked very hard to streamline the accounting processes, where he was currently employed. From 2009 he also worked as an accountant for TnJ’s until June of 2018. He also worked for Voyager’s View in Red Lake Falls as security.

He enjoyed fishing, tinkering with different things, challenging his mind, video gaming, cars, scaring people in the Haunted Woods, and spending time with his dogs.

He is preceded in death by his grandparents Edward and Elinore Lieske, and Ray and Fran Adelman.

Visitation will be held 5-8 PM on Friday, August 27, 2021, at St. Joseph Catholic Church in Red Lake Falls, MN with a prayer service at 7:00 PM and also one hour prior to the service on Saturday.