Graydon Selmer Larson, 92, Moorhead, MN, formerly of Ada, MN, passed away on the morning of Tuesday, August 24, 2021, at Essentia Hospital in Fargo, ND.

Born July 26, 1929, he was the youngest of three children born to Anna (Hoven) and Selmer (Sam) Larson on the farm near Ada, MN, where son Sam still resides. 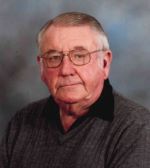 Graydon graduated from Ada High School in 1947. He went to Moorhead State College for a year where he learned, among other things, how to play Pinochle from the elderly couple he rented a room from. Graydon joined the army in 1948, it was a brief stint because of his father’s sudden death. He was given an honorable discharge to go home and help with the farm.

One of his proudest memories was playing basketball in the Independent League with buddies from Ada. They did very well. We were reminded often of his 32 point game and the team picture on the upstairs wall we couldn’t help but see. They were Red River Valley Champs in 1952.

On December 30, 1955, Graydon married the love of his life, Ann Marie Gordon, and together they raised three children, Jason, Sam, and Mary.

Graydon had a passion for Quarter Horses and Appaloosas all his life. He studied bloodlines and bred, raised, and sometimes showed them. To this day, he has two mares and a stud colt.

Hank Williams Sr. was his favorite singer and if we could get him in the right mood, he would do a little Hank Williams yodeling song.

And we can’t forget sugar beets. Graydon’s father, Selmer, started raising them in the 1940s and they have been an important crop staple ever since. There is one etched in his tombstone along with a horse and a sprig of wheat.

He is preceded in death by his parents, Selmer and Anna; wife, Ann; brother, Glenn; and sister, Lyla.

Memorials are preferred to the Michael J. Fox Foundation for Parkinson’s Research.

Visitation: One hour before the service at the church.