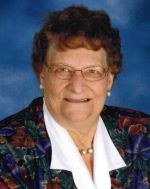 Irene Ann Bachmeier was born on September 20, 1937, to Anthony and Frances (Heffner) Bachmeier in Rugby, ND. She was baptized on October 3, 1937, in Orrin, ND. She lived with her parents on a farm south of Towner, ND until May of 1943 when they lost their home to a fire. The family then moved to Towner and later to Sawyer, ND where Anthony got a job in the coal mines. After injuring his back working in the mines, they moved to Fargo, ND where Irene attended Lincoln Elementary School. In 1946 they moved to a farm near Perley, MN.  In 1951 they moved to Clarissa, MN where Irene attended country school. A year later they returned to the Hagen farmstead near Perley. She was a member of Concordia Lutheran Church near Hendrum, MN, and was confirmed on May 17, 1953.  Irene graduated from Borup High School in 1956, going on to attend Interstate Business College in Fargo, ND.

Irene was united in marriage to Allen Carlyle Larson of Borup, on November 17, 1956, at Immanuel Lutheran Church in Hendrum. They lived on the Chester Larson farm near Borup until 1964 when they moved to the Johannason farm that was 2 miles west of Borup. Together they raised 7 children.

Irene enjoyed being a stay-at-home mom. Spending time with her children and hosting many family gatherings brought her great joy. As a family, they farmed small grain and corn, had dairy cattle, chickens, ducks, geese, and lots of kittens, puppies, and bunnies. Irene loved spending time with her grandchildren. She also loved gardening and raising her beautiful flowers, freezing vegetables, and canning. She enjoyed sewing and made many quilts for her children, grandchildren, and great-grandchildren.