Marne Thompson of Red Lake Falls, MN passed away on Saturday, October 2, 2021 surrounded by his loving family at his Red Lake Falls home.

Marne Theodore Thompson was born February 10, 1941, at Rainy River Ontario Canada son of Howard and Marion (Kolser) Thompson. He was raised there and attended school in Morson, Ontario until the age of 12 when he moved to Winnipeg where he finished high school. He attended 2 years of Manitoba University receiving a degree in architecture. During the two years at the University he played football. Marne walked the horses at the Assiniboia Downs horse track. He moved back to the Morson area where he worked at Dalseg Hardware Store and became manager.

On November 16, 1962 Marne was united in marriage to Shirley Nordin at the Little Village of Bergland. The first event held at the Trinity Lutheran Church was their wedding. The couple moved to Red Lake Falls in 1966 and purchased the Hunt Hardware which they owned and operated until their retirement in 2010. The 44 years they owned Thompson Hardware he was involved in the Volunteer Fire Department as volunteer and chief for many years, Oak Knolls Golf Course, the Red Lake Falls Sportsman, the Red Lake Falls Flying Club, Boy Scouts, Inter-County Board, was a member of Bethany Lutheran Church.

Marne enjoyed fishing, hunting, golfing, playing cards, cooking. Most of all he loved and cherished the time spent with his family.

In Lieu of flowers memorials are suggested to the charity of your choice. Condolences may be sent at www.johnsonfuneralservice.com. 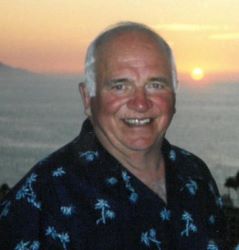