The Tri-County Community Corrections Board held a special meeting this afternoon inside the Polk County Justice Center. The only item on the agenda was a Northwest Regional Corrections Center Population Reduction plan due to staffing shortages.

Tri-County Community Corrections Executive Director Andrew Larson’s recommendation to the board was to reduce the jail’s population by closing down one of their sixty-bed housing units, bringing the jail’s capacity from 200 inmates down to 140. The board approved the request unanimously after some discussion and hearing an update from Larson.

Larson explained when the reduction plan will go into place. “The plan will go into place at the end of next week, December 10,” said Larson. “It will be accomplished in a variety of ways. One way will be by reducing some of the per diems that we house. We will reduce some of those numbers, and those entities will have to find alternative answers while we work through this. We’re also going to look at reducing some of our per diems and finding alternative housing for them.”

Larson said the decision needed to be made because the department isn’t receiving enough applicants to keep the jail fully populated. “Unfortunately, staffing turnover and recruitment challenges are not new,” said Larson. “We’re just struggling to find candidates that are willing to do the work of a Corrections Officer.”

Another issue is not having the appropriate amount of time to train new hires. Larson says it’s not worth keeping the jail fully populated if they’re sacrificing the proper training to new employees. “We have had a set number of hours that we require for training since we moved into this facility, and it’s continued to go up over the years,” said Larson. “Even now, it’s still not enough to properly train our employees. Instead of a set number of hours, we will modify our training to train each post within the jail as if it was its own job. The problem we’ve seen with our previous training is that it could be four weeks without being at a particular post, and once they’re put there, it’s just too much for them to manage.”

Larson is optimistic that the new training process will give the staff the tools to succeed and bring in more applicants and hires. The decision to reduce the population will affect some funding and revenue for the jail, but Larson says it’s unknown at this time to what extent. “This will have a financial impact. What that financial impact will be is tough to say,” said Larson. “We typically bring in $100,000 per month in housing per diems, so for example if that number gets cut down in half, that’s $50,000 in potential revenue that’s gone. This gives you a sense of what the financial impact will be, but I think if we don’t make this move now, it will continue this turn of staff, and ultimately the cost could end up being far greater than what we’ll see in the short run.”

Larson hopes to bring in a pool of new applicants and get them the proper training so that the jail can be re-opened to its full capacity in 3-4 months. 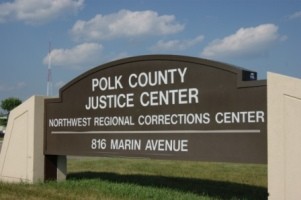