The University of Minnesota Crookston athletic department announced today that Head Men’s Basketball Coach Dan Weisse will not return. Weisse has served as head men’s basketball coach for eight seasons, helping the Golden Eagles to a 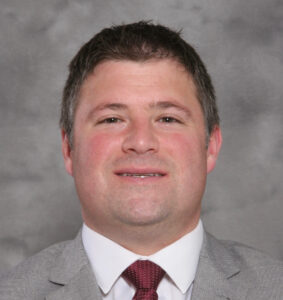 NSIC Tournament berth during the 2018-19 season.  “We appreciate the commitment, and effort put in over the past eight seasons by Coach Weisse as Minnesota Crookston men’s basketball coach,” said Stephanie Helgeson, director of athletics.
UMC Associate Head Coach Bryan Beamish has been named interim head coach. Beamish has been an assistant coach at UMC since the 2014-15 season. A search for a head men’s basketball coach will begin immediately.

KROX’s Chris Fee talked with Dan Weisse Friday morning and this is what he had to say about the surprising news.

Dan Weisse’s comments are below-

Today at 9:00 am I had a meeting with our athletic director and human resources person. I was informed that I am not being renewed and the decision. Needless to say, I was a taken off guard by this. I asked why was not being renewed and I was told that the decision has already been made. I had asked what went into the decision and was told that I could choose to resign if I like and that the decision has already been made. I had asked if there was something in my Human Resources file that I was not aware of and I was told that it was clean. The meeting took eight minutes. While I am still searching for answers and am disappointed and saddened by the decision. Here is what I would like to say:
Thank you to the University of Minnesota Crookston for this wonderful opportunity you have given me and my family. My kids grew up through the Cathedral School here and they have had a wonderful place to call home for the past eight years. The part that makes me the most emotional about this whole this is that we will have to uproot our family. There are so many wonderful people in Crookston. This is a wonderful community and a great place to raise a family. We have met so many great people and will be hard to say goodbye, and I do not like goodbyes.
Through my time at UMC we have graduated numerous players, some of those players were the first in their families to ever get a degree and I’m darn proud of that. My mantra has always been it’s not where you’re from but if you fit with what we are trying to do as a basketball program and as an institution. That is, if you’re a team first guy that wants to achieve on the floor and off, you might have an opportunity to play for me. 99% of the players I recruited have not been to Crookston, 95% never heard of it. Those that bought in and were team guys first received their University of Minnesota degrees. I did let five players go this offseason and one transferred on his own, and one graduate transferred, which is the best way to transfer. As a coach, I wanted to get our program back to Sioux Falls and had to make tough decisions and let some players know they probably were not going to play the minutes they wanted to play. Those are the worst meetings but I am here to help guys land on their feet and want them to know we are here to help. I always ask, how can I help? What do you need from me?
This past year we had a team GPA of a 2.88. I like it above a 3.0 but it is solid for men’s basketball. All our players were eligible for the upcoming season. We are the second most successful program to our baseball program and are the most diverse. This year we are graduating four, possibly five guys (summer school). Next year we have four guys on track to graduate. We have just finished up our recruiting for next year and I’m hoping for the best for those guys.  This past year we had three players play professionally in Spain and I’m darn proud of that. We had the all time leading scorer not just in Crookston history but in NSIC history. We had an NSIC Defensive Player of the year. We also had the only winning season in program history and made the only trip to the conference tournament. The covid situation did set us back but we made a jump and were ready to make an even bigger one. I was so optimistic for the future of our program.  I know I am forgetting some things, and I am not sure why this is all happening. But I am grateful for the opportunity that was given to my family and I. We will cherish the relationships we have built over our eight years in Crookston. The job was not done but my job is here. We will figure out what is next. Thank you to all our people in Crookston, we owe you all so much. If there ever anything I can do for you please let me know.”