Crews arrived on the scene to find smoke showing from the rear of the residence. Crews entered through the rear of the residence, where they encountered heavy smoke and fire. Crews were able to extinguish the flames and quickly reduce any further fire damage. When fire crews arrived, they were informed by the homeowner that there were no other people in the home. There was moderate fire and smoke damage to the home. A damage estimate is not available at this time. The Grand Forks Fire Marshal’s Office determined the cause of the fire to be a failure of an electrical cord on a window air conditioning unit.

The Grand Forks Fire Department responded with five engines, one truck, and one command vehicle with eighteen personnel. Altru paramedics assessed one occupant on the scene who was not transported to the hospital. The Grand Forks Police Department, Altru Ambulance, and Xcel Gas-assisted on the scene.

The Grand Forks Fire Department would like to remind residents to check their smoke detectors to make sure they are functioning correctly. 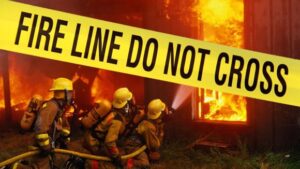